A seminar on ‘Crisis, Endurance and Accommodation of Urban Refugees’ by Dr Jonathan Darling

Dr Jonathan Darling, Assistant Professor of Human Geography at Durham University, and international advisor for the REFUGOV project, presented his research on Crisis, Endurance and the Accommodation of Urban Refugees at the Research Seminar of the Institute of Geography and Spatial Planning, at the University of Luxembourg on 12th June 2018.

Dispersal, a policy created in the late 1990s, aimed at distributing asylum seekers throughout the territory of Great Britain. In the media, this policy was presented as a way of relieving the ‘burden’ of refugee reception from the south of the UK. At that time, the UK was portrayed as too generous, too welcoming. Jonathan Darling mentioned for instance that, in 1999, the Daily Mail titled an article dealing with dispersal: ‘Holiday Camp for Refugees’. He also noted that dispersal has been portrayed as a form of emergency accommodation. To date, the UK asylum dispersal system has been described as being in crisis. However, it has remained the same and has not changed over time. Given this context, Jonathan Darling proposed answering the following question: Why are the same narratives being reiterated over time?

Jonathan Darling’s presentation aimed at understanding how the dispersal system operates at an urban level. His research involved four case studies: Birmingham, Cardiff, Glasgow, and Sunderland. His argument was that dispersal represents a technology of governing associated with the erasure of asylum from public concern, with consequences for how we perceive the responsibilities of the contemporary state, urban democracy and people’s suffering.

Jonathan Darling further argued that dispersal is not only a technology of governing, but also a technology of policing. He specified that, following Rancière, he saw policing as ways of perceiving. His presentation suggested looking at three different ways of perceiving dispersal: 1) privatisation of housing and the market, 2) austerity and the dismantling of urban capacities, 3) suffering, slow violence and endurance.

Moreover, as Jonathan Darling mentioned at the start of the presentation, the policy of dispersal has constantly been viewed as being in crisis. According to him, the term ‘crisis’ refers to three different aspects. Firstly, a crisis is a time of intense dis-functioning. Secondly, it is a space where decisions must be taken. Thirdly, a crisis is when the system gets ever closer to the tipping point, but never close enough to create the necessity for change.

Although his presentation focused on dispersal, it was also concerned with neoliberalism. In this regard, he noted that his work was informed by the writings of Elizabeth A. Povinelli[1]. The main argument of her book is that neoliberalism is meant to put people down. Following this perspective, neoliberalism aims to deplete the capacities to oppose. Indeed, she demonstrated that the ‘incitement to wait, to be patient, to bracket harm until the impasse has been resolved and the account given, is part and parcel of how power is organised’ in late liberalism[2].

In 2012, the system of dispersal was changed. Since then, the Home Office has had contracts with three private providers: G4S, Serco and Clearel. The contracts known as COMPASS (Commercial and Operating Managers Procuring Asylum Support) constitute a crucial shift.  National authorities now see asylum as a market place. It is worth mentioning that the privatisation of dispersal was not a consultative process and that local authorities were not involved. The issue was not even been debated in Parliament. Privatisation has shifted the matter away from the public, and it is problematic to find who is responsible. Asylum is currently framed as a private company issue and alternative ways of framing asylum are not even considered.

Austerity has dismantled what was previously in place. Previously, local authorities could provide housing and find support for integration. They now officially have no role in refugee accommodation policies. They have therefore lost their knowledge, expertise and institutional memory. However, they still have to deal in practice with the reception of asylum seekers (e.g. regarding health issues).

Asylum seekers are accommodated in bad living conditions (presence of rats, pregnant women being accommodated in an apartment located on the 6th floor without a lift, etc.). However, people do not feel strong enough to complain. In fact, the possibilities of contesting matters remain very low.

In his presentation, Jonathan Darling offered an analysis of the UK asylum dispersal system at an urban level. He showed how local authorities were to a certain extent involved in and then excluded from refugee accommodation policies. Indeed, he pointed out the effects of privatisation on local authorities and asylum seekers themselves. He emphasised that the asylum accommodation system reshaped through neoliberal experimentation has turned into an increasingly unstable model of provision. As such, Jonathan Darling’s presentation was relevant not only with regard to refugee studies, but for the analysis of neoliberal policies as well. Finally, he invited his audience to focus on the local context in order to renew the study of asylum and neoliberal policies and the way they are experienced. 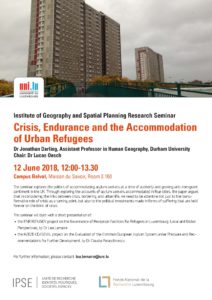