Within the framework of the REFUGOV project, Lucas Oesch organised a panel at the APAD Conference on Migrations, Development and Citizenship, which took place at Roskilde University in Denmark on 23-25 May 2018. The panel was entitled Processes of subjectivity in refugee camps and reception facilities: Cross-perspectives from the global South and North and aimed at exploring the complex and ambiguous formation of subjectivity and citizenship in ‘refugee spaces’. It also aimed to create a dialogue between studies concentrating on the global South or North in order to exchange perspectives.

Indeed, processes of subjectivity in the camp, and the ‘negotiation’ of citizenship, are an important field to be looked at (see e.g. Minca, 2015; Pasquetti, 2015; Rygiel, 2011; Sigona, 2015; Turner, 2016). These processes form around ambiguous lines of exclusion and inclusion. Refugee camps in the global South and reception facilities for refugees in the global North have often been compared to ‘spaces of exception’ (Agamben, 1998). In the camp, laws are suspended by the sovereign power. Refugees end up without a ‘politically qualified’ life. Their lives are left ‘bare’, and they only retain a biological life. This understanding of camps has been highly criticized. It has been showed how the ‘political’ is always present and re-created in the camp (see e.g. Ramadan, 2012; Rygiel, 2011; Sanyal, 2014) with practices such as squatting, the transformation of the materiality of the camp, claim making, and so on. Refugees turn an ‘exceptional’ space into a living space (Agier, 2011). It has also been showed that camps are caught into broader socio-economic dynamics of exclusion (Martin, 2015), as well as into inclusionary dynamics (Oesch, 2017). 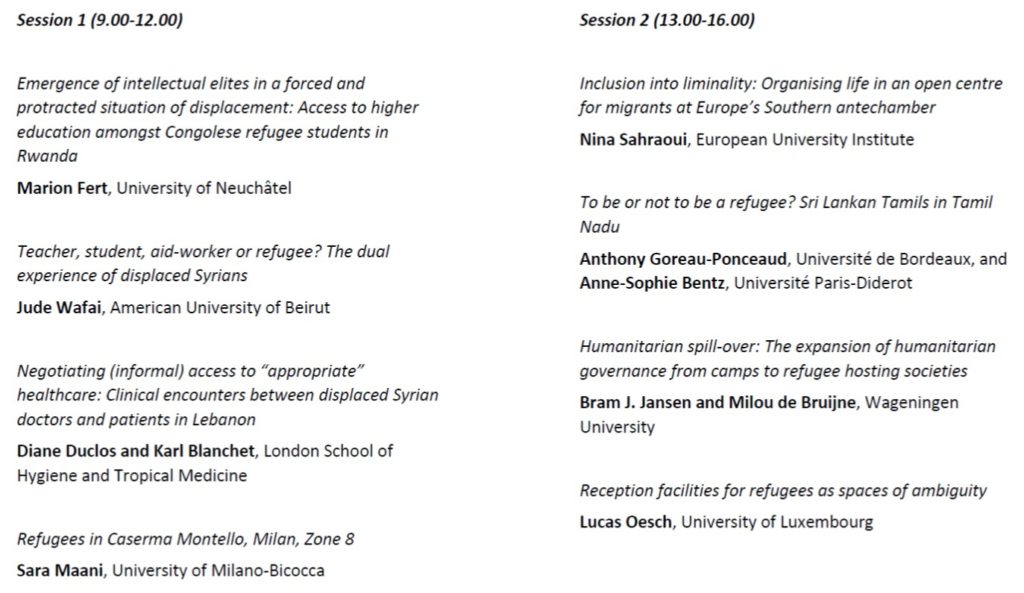